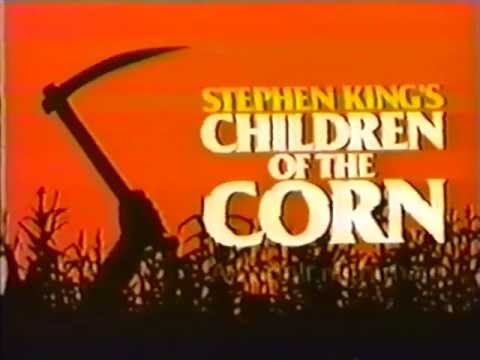 PLOT: A couple arrive at Gatlin, Nebraska, to discover that the entire town has been taken over by a child cult that worships an evil spirit called “He Who Walks Behind the Rows”.

Children are creepy enough, but give them things like weird, Amish-style clothing, names like Malachi and Isaac, and red hair, and suddenly things get all the more creepy. I wouldn’t say that this is Stephen King’s best story or best movie adaptation, but it’s oddball enough to be entertaining. Also, this is like one of very few credits Linda Hamilton has that doesn’t involve a time-traveling robot, so that’s at least notable.

The story goes that newly minted doctor Burt (Peter Horton) and his girlfriend, Vicky (Linda Hamilton) are traveling through Nebraska to get to Burt’s new job. Along the way, they get into an accident involving a kid that may have already been dead. They go to the closest town, Gatlin, to discover that it’s basically a ghost town, save for a few kids with murderous intents.

The kids are actually a cult that worships He Who Walks Behind the Rows, apparently a very real demon that loves him a good sacrifice. They’re led by weasel faced ginger Malachi and Isaac, who sounds very much like your chain-smoking aunt. The cult has killed off all the adults from Gatlin and don’t take kindly to Burt and Vicky, who match the prophecy of the “Outlanders”. Shit goes down and kids are taught some major lessons.

Gore free for the most part. Burt gets stabbed, but nothing life threatening.

If you’re afraid of children, cults, or corn, this is your worst nightmare, but for us normies, this isn’t too frightening at all.

This movie is fun, but never too scary. Kids and outlying religions are generally creepy, so yeah, the idea of an all-kid cult is messed up, but they’re close are just so ridiculous that you can’t help but feel not threatened. Overall, though, I think Children of the Corn is a good time and is a pretty quick watch.