Three episodes into HBO’s new semi-sci-fi, slow burn drama The Leftovers is probably more than enough to decide whether or not the show is worth any more of your time.  With television as good as it is right now, there are plenty of excuses on the other channels to move on from something that hasn’t grabbed you in three hours of time.  If, however, you checked out after two episodes, I beg you to give it one more hour.

The third episode, entitled “Two Planes and a Helicopter”, is a departure from the groundwork the previous two episodes have already laid out.  Both the pilot and the second episode extend their branches wide, covering multiple character plotlines as they develop further from the fateful day of reaping.  The storylines are unforgiving for the casual watcher, as information is leaked out to us, the viewer, rather than laid out for us.  It’s a sweeping character piece involving silent cults, a healer, and those that are just trying to move on with their lives.  The third episode breaks from this, as it narrows its focus onto a specific target: the pastor.

Matt Jamison, played by Christopher Eccleston, is a preacher that rallies against the idea that the reaping is, in fact, the Rapture.  Since the incident, he starts a grassroots campaign to sully the names of those who were taken, in order to show that they weren’t the good people the Rapture promises would ascend to Heaven.  Why does he do this?  It’s possible that he wants people to believe that they still have a chance to go to Heaven.  Maybe he wants to make himself believe.  Or maybe he just doesn’t want to believe that everything he’s put so much faith in is pure bullshit.  Sure, he’s pissed off plenty of people, but he’s a man grasping at straws to keep his own faith while trying to give everyone else a reason to believe in something that makes little sense anymore.

It’s a character that we’ve only gotten a peek at for the first two episodes, but becomes on full display in this one.  We find out that he’s in danger of losing the church that was left to both he and his sister by his parents after they died in a fire when he was just a child.  He’s essentially given 24 hours to come up with $135,000 before the bank turns the deed over to a potential buyer and this is the set up for the best episode in the show’s short lifespan. 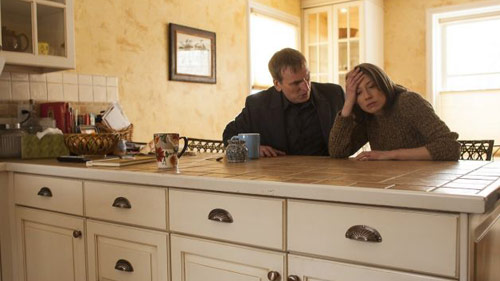 I do not want to go into too much detail on what takes place in the episode, but I will say that it is a gripping hour of television.  His trials in order to get the money (and his life story, in general) are, by no accident and not necessarily subtly, reminiscent of the story of Job.  He truly believes he is being tested in much the same way Job was and you hang on every success and every failure that occur in such a short amount of time, leading up to an ending that is nothing short of something you’d see in The Twilight Zone.

While the ensemble seems to be all the rage these days, and it seems we’ll be getting more of the larger episodes in the coming weeks, it gives me hope that there will be the tight-packaged episodes sprinkled within the bigger picture that can really develop some of the characters further.  In this episode, we got to go back and find out how Matt Jamison was directly affected by the events, filling in blanks from previous episodes.  It’s a nice touch that makes the developments intriguing and allows the character to grow.

I guess I should say that I’ve only seen the pilot episode of Lost, as it seems most people that felt burned by Damon Lindelof are not quite ready to forgive him for whatever it is they think he did to them; personally, I don’t have an opinion of the guy, but I will say that The Leftovers has potential to be remarkable television, if given the chance… it also has potential to be John From Cincinnatti, so we’ll have to wait and see.