This week, Key and Peele’s Keanu hits theaters. Combine that with The Jungle Book featuring a couple of big cats, it looks like the feline world is filling up the box office. Make no mistake, though: dogs are still man’s best friend, so here’s a few cats that could hang with the big dogs. This week’s 5 For Friday: 5 Pop Culture Cats Cool Enough to Be Dogs

Spoiler alert: no other cat on this list had sex with a young Paula Abdul, so this MC Skat Kat has my utmost respect. MC Skat Kat is a throwback to a time when MTV played music videos and artists thought it was a good idea to sing and dance with an animated cat in a wife beater. Fun fact: Romany Malco of The 40-Year Old Virgin and Weeds wrote the MC Skat Kat rap from “Opposites Attract”. The more you know.

4. Milo – The Adventures of Milo and Otis

Animal best friends are always super cool, especially when they come from different species. For kids of my generation, The Adventures of Milo and Otis was our first taste of the idea that a cat and a dog could become best friends. Also, it’s probably their first exposure to Dudley Moore, provided they are lucky enough to have been spared that disturbing Santa Claus: The Movie.

Milo, despite just being an itty-bitty kitty, manages to get into a huge adventure as he tries to find his way back home and to his best friend, Otis the Pug. Throughout the film, Milo encounters bears, snakes, and even an owl.

Unfortunately, there’s plenty of controversy surrounding the actual production of the film and its treatment of the animals, but that doesn’t mean that Milo is any less of a badass. If anything, it just proves it even more. 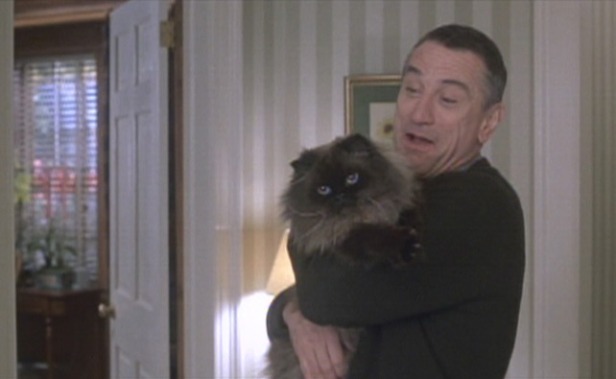 The major difference between having a cat versus having a dog basically comes down to what happens when they go to the bathroom. If you’d rather sift through sand or pick things up with your hand, you can usually decide which type of animal is right up your alley. Jinx is that special kind of animal that goes to the toilet to do his business. I have both cats and dogs and I couldn’t tell you how much easier my life would be if just one of them started to use the toilet on his own. Jinx, you’re okay in my book.

2. The Cheshire Cat – Alice in Wonderland

In a world of crazies, there might not be a crazier being in Wonderland than the good old Cheshire Cat. Cheshire just hangs out all day in a tree, disappearing and reappearing whenever he pleases, making Alice’s life either easier or more difficult just because he can. That chillax lifestyle is what we should all strive to be about, and Cheshire Cat’s got that in spades.

The 1960s and 1970s were a weird time to be alive, and Fritz the Cat is a great example of just how crazy things could get when people stopped giving a fuck. Not only was there a comic strip about a cat that liked to do drugs and get it on with other anthropomorphic animals, they decided that it would be a good idea to make an X-rated film about it. Nowadays, this stuff probably wouldn’t go anywhere past a DeviantArt account.

In the film, Fritz winds up having group sex, smoking that sweet, sweet kush, and kind of just being an all around dick to everyone around him. That being said, Fritz has the most street cred of any fictional feline that has come before or after. It’s like if Felix got woke and tried to start a revolution, but then just sort of got distracted and had sex with a crow that was also a drug dealer.

One thought on “5 For Friday: 5 Pop Culture Cats Cool Enough to Be Dogs”