PLOT: After a traumatic childhood, a man becomes unhinged when his mother dies and begins to stalk women with a flamethrower.

What if I told you there’s a movie out there that’s basically Psycho with a flamethrower? Doesn’t that sound like the greatest thing you’ve ever seen? I don’t blame you, that premise has my ticket sold right there.

Don’t Go in the House is the story of Donny Kohler, a maladjusted man with mommy issues. He doesn’t have any friends, he’s most likely a virgin, and he doesn’t know how to interact with people. But when his mother dies, things somehow get worse for him. He starts to hear voices that start to influence what he does. Of course, for some reason, voices never do anything positive like tell you to start going to the gym more often or maybe go back to school. No, Donny’s voices are telling him to lure women back to his home and burn them with a flamethrower.

Don’t Go in the House (also known as The Burning) is one of those gems that you come across from this era of filmmaking. It’s not supreme filmmaking in any sense of the word, but it’s just oddball enough that it can entertain for a couple of hours. AN added interest for me is that this film was actually shot about a half-hour from where I grew up, in the Atlantic Highlands section of the Jersey Shore.

This is a pretty lowkey movie considering this is about a guy that kills people with a flamethrower. The US version cuts out a lot of the more gruesome moments of the first kill, but even so, a lot of the kills occur offscreen.

This movie has some legitimately creepy moments. The makeup work for the burned bodies is well done and there are some well-executed jump scares when Donny starts to imagine the bodies haunting him. Overall, it’s not particularly spooky; it won’t keep you up at night, but for a low budget slasher, it does pretty well for itself.

Like I said in the Gore section, the US version, for some reason, is heavily edited. In the international version, the first kill shows a lot of the victim, but the version that’s available on Amazon Instant only shows her from the shoulders up. 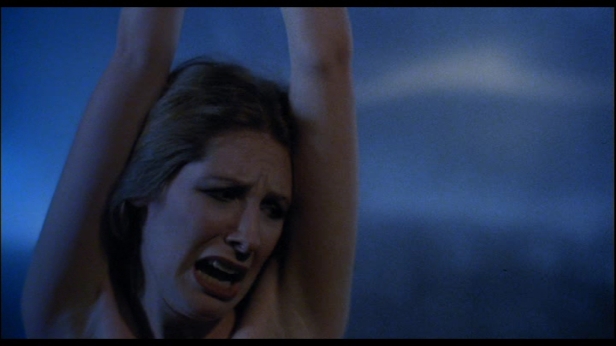 I dig these kinds of movies; I’m a sucker for a low budget slasher movie from the 1970s and 1980s. It’s part of the reason I love the genre. Ever so often, you can find a nice little gem that has something to offer in terms of entertainment. Dan Grimaldi does a pretty decent job in this film in the lead role and as far as a Psycho ripoff goes, you can do much worse.