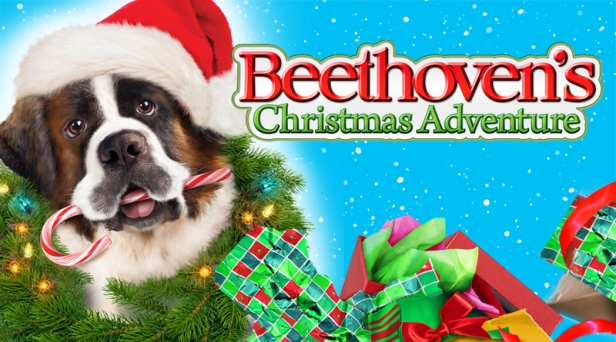 PLOT: A Christmas elf accidentally takes off in Santa’s sleigh, crash lands in a small town, and loses the magic toy bag. Beethoven must rescue the elf, recover the bag from greedy crooks, and return the sleigh to Santa in time to save Christmas.

Remember Charles Grodin? No, that’s Steve Martin. He had a talk show on TV in the 90s. No, that’s Martin Short. Whether you remember him or not he was the human star of the first Beethoven movie back in the early-90s, and 19 years later we have this made for DVD “sequel” that is light years away from the charm original. It was a misstep meant as a cash grab.

If there was a movie that could have every cliché of a Christmas movie ever, it’s Beethoven’s Christmas Adventure. There was the Scrooge-like toys salesman, the buffoon of an elf, the single-parent bickering child and mother, the fate of Christmas was at stake, and of course, talking animals. The only thing missing was the love interest for the teenage boys, but everything else was in place for your paint-by-numbers Christmas movie. And boy, did it feel lazy.

If anybody out there is worrying about what Kyle Massey is up to you, well, I found him in the Beethoven Christmas Adventure, so we know that he had work in 2011. He essentially plays his character from That’s So Raven but as a Christmas elf. It’s not a very inspired performance, and just like the rest of the production, it was mediocre at best. Some actors are pigeon-holed by circumstance, while others — such as Massey — only know how to act one way and never improve their skills.

The cast seems to be a Who’s Who of B-list character actors. The mother from Suite Life of Zack and Cody, and John O’ Hurley lead the way of faces you know but don’t really know where you know them from. There are no stand out performances among these normally supporting actors, and that’s one of the many areas where this movie fall short.

Beethoven’s Christmas Adventure’s love story is really between the toy salesman and money, and a mother and her son. There’s no romantic interest or anybody that someone has to impress. The story between the mother and son became extremely transparent once it is explained that the father was dead. They didn’t do much to mask where they were going for with it, which is either poor writing or poor acting. Either way, it made the whole thing have the emotional impact equal to ‘meh’.

It’s a movie about saving Christmas so every aspect of Christmas-ness is in present. There’s gaudy decorations on the floats in the Christmas parade, a group of traveling carolers make an appearance, a mall Santa, and a black friday-esque rush to buy latest phenomenon at the toy store. There isn’t much on Christmas-ness checklist that Beethoven’s Christmas Adventure is missing.

Beethoven’s Christmas Adventure is a harmless film. It’s not terrible, but it doesn’t need more than one viewing. That’s not to say that there isn’t OK work in the film, but sometimes you have to make a paycheck and that’s what it seems like some actors did here.